Posted on November 25, 2013 by hermommathequeen

Watching Princess Piggy Poo popcorning around in her new palace, I can tell she’s feelin’ the love. Today at the farmers market I bought carrots with the green tops on. The merchant immediately started to rip off the tops and was a little freaked out when I stopped him with an emphatic, “No, these are for my guinea pig!” 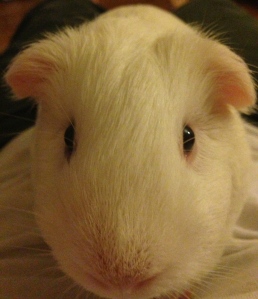 The guy gave me a funny look as he folded the greens toward the carrots, placed them in the bag and handed it to me. Before I walked away he smiled and gave me an extra carrot — tops in tact. I turned around to walk away tucking my bonus carrot into the bag when it dawned on me, “Hey, do you have cilantro?” I called back. One dollar later and Princess Piggy Poo would be feelin’ the love.